You might have heard of cannabis resin during the pre-legalized days when your friends were trying to scavenge that last black tar residue off of your bongs and pipes. But with the array of cannabis concentrates available today, why collect resin “cigar-butt” style to use afterward when you can learn how to make rosin?

We’re talking about “rosin,” and if you were in the know, you’ll be already asking us “how to make rosin?”

Cannabis concentrates aren’t cheap and they’re by and large difficult and not to mention, dangerous to produce. Shatter, budder and wax all require solvents and lab equipment to produce, and that’s not accounting for the risk and danger you expose yourself to when you’re making these concentrates.

Rosin, on the other hand, is a completely different story. Rosin is unique among its concentrate counterparts, being dirty solvent-free, and being extremely convenient to extract– all without the compromise to flavor and potency.

In this article, we’ll alleviate any informative concerns you may have had about rosin. We’ll shed light on what it is, tips for consumption along with steps for how to make rosin at the comfort of your home.

Rosin is a cannabis concentrate, meaning that it’s a consumable substance made up of concentrated amounts of the cannabis plant’s choice compounds – primarily cannabinoids and terpenes – the psychoactive molecules responsible for cannabis’ therapeutic effects.

Rosin is commonly touted for its solvent-less nature, being extracted without the use of chemicals like isopropyl alcohol, butane, propane and Co2 that are so common among other concentrates.

The positive reviews are well deserved as the process of extracting other concentrates, like shatter, brings with it a side of caution for consumers, given that faulty processes make for an “unflushed,” solvent residue-filled experience.

Extracting other concentrates, like shatter and its butane hash oil cousins, is not for the amateur DIY Bill Nye because of butane and propane’s highly flammable and invisible characteristics. Instead, professionals are needed with closed-loop systems, otherwise, real-time Hollywood explosions are likely.

This isn’t the case for rosin, as we’ll delve more in the “how to make rosin” section. In addition, rosin can be just as cannabinoid pure, given that it’s THC levels range from 60-90%, or as some cannabis connoisseurs speculate, just 5-10% lower than shatter levels. 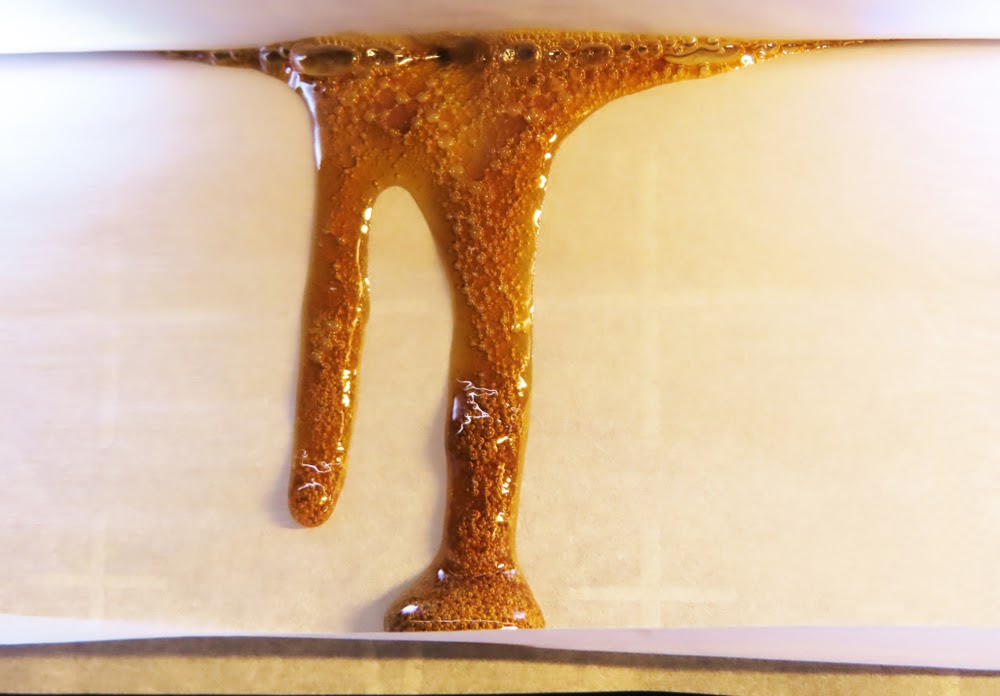 How To Make Rosin At Home

Extracting cannabinoids and terpenes to make rosin doesn’t have to be complicated. Although, with our current multi-gazillion dollar cannabis industry, extraction processes can sure get lavish and techy. Here’s a step-by-step process that avoids all the glamorous advanced equipment and gets straight to the bottom line of producing solvent-free rosin.

Step 1: Set the temperature of your hair straightener between 245℉ and 280℉ and place in on a flat surface sitting up

Step 2: Cut your parchment paper into a 4 by 4 inch square then fold it in half

Step 3: Take your cannabis buds and place it in-between the fold of the parchment paper, making sure it’s fully covered before placing it between your hair straightener plates.

Step 4: Put on your gloves.

Step 5: Place the folded paper with the cannabis inside in-between the plates of your hair straightener, then press it down until you hear a sizzle. This should take 5-15 seconds.

Step 6: Release your hair straightener, then using your tweezer, take the parchment paper out and unfold it to see your rosin.

Step 7: Using your dabber, collect the beads of resin and place it in an airtight container to store

You’ve done the steps of how to make rosin!

If you didn’t notice, you used your hair straightener as a DIY rosin press to make the delectable solvent-free concentrate. What this essentially does is apply extreme heat and pressure to your marijuana flowers so that cannabinoids and terpenes are extracted–working like a charm!

However, the DIY rosin press does have limitations, specifically in terms of the quality and quantity of rosin you can produce. The yield produced still makes for a wonderful rosin experience when consumed, but the amount of cannabis used for extraction is limited to roughly 7 grams. Either way, it’s extremely convenient and cost saver.

If you’re interested in the best of the best rosin presses that are made for more commercial purposes, check out hydraulic rosin presses.

How To Make Rosin: Final Thoughts

Rosin isn’t your average cannabis concentrate–it stands out because of its solventless makeup, along with its high potency and flavor-filled profile. In this article, we showed you that making rosin is straightforward and affordable, requiring little time and materials. However, there’s a slight trade-off using this method, as the yield and quality of your rosin can be somewhat compromised.

With that being said, the method’s advantages far outweigh its downsides, so using a DIY rosin press is worth undertaking! We’re positive that you’ll be more than happy when you see the results.