Skip to content
Whether you’re a seasoned veteran or new to cannabis, without a doubt, a bong has come across your path. This timeless cannabis accessory can be found in the homes and garages of many.  Yet, to the naked eye, they may look all the same. The reality is far from it. There are so many types of bongs.  You might be surprised to know bongs come in a wide array of shapes, sizes, and functions. The bong you may have seen or tried could have looked like a vase. Or it could have looked like an interplanetary spacecraft. The bong for you could be one or the other. Or maybe something in between, as the bong family is ever-growing. The different types of bongs are vast. To make life easy, we’re going to create a bong family tree of sorts.  We’ll also go over the different materials and shapes of common day bongs. The goal is to find which suits your needs and learning about them all along the way. 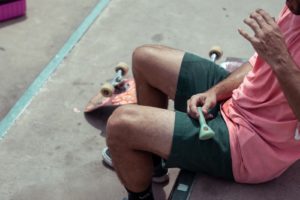 A Quick History on Water Pipes and Bongs

The origin and history of the term and smoking device bong have long been disputed. Water pipes have been used for many years across the world. The most likely variation we see now is from the country of Thailand.  While stationed in Thailand during the Vietnam war, Americans first encountered a “baung“. A “baung” is a bamboo water pipe made for smoking cannabis. As the U.S. troops spent plenty of time with the local villagers, they quickly assimilated to the use of a baung. The term was then brought back home to the United States, with the first recorded use of the term bong in the January 1971 issue of Marijuana Review.  Since then the use of bongs has exploded, becoming one of the most used smoking devices.  Whether or not Thailand was the first to use a water pipe or bong for cannabis is still to be determined. What can’t be understated is the influence it had in Western culture.   Related: How To Clean A Bong and Glass Pipe

The bong family is enjoying healthy growth and an increase in popularity. This increase has allowed companies to develop newer, stranger and more futuristic variations. Bongs have become somewhat of a cultural or artistic statement as well. With serious money and time invested in bong art for display. We’re going to start off with the different types of materials used for bongs, as this is the foundation. From there we will move into the different styles and their functions. 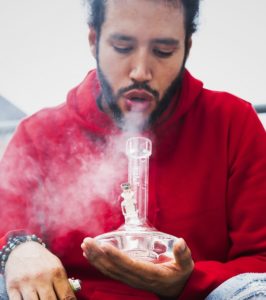 Different Types of Bongs and Their Materials

The most common and sought after material, glass is a staple for bongs. Its versatility allows the creator to mould it into many shapes. Bongs are susceptible to heat change, and glass, for the most part, is not affected by these changes. As well, glass does not affect or alter the taste of cannabis. The only drawback is glass can break easily from a fall. But this can be prevented by choosing the right shape.

Commonly used in lower quality bongs, plastic and acrylic bongs are cheaper. Unlike glass bongs, plastic bongs are harder to break and can be dropped often. While this is a positive, unfortunately, plastic can affect the taste of the smoke. With that being said, it’s still a great option and is perfect to travel with.

Silicone bongs have been popping up more and more. Although this may soon end, as the plastic flavour it emits is a big downfall. It does have its benefits. Silicone bongs can bend and are easily cleaned. It might be an alright option for people with butterfingers. Either way, there are better options for the same price point and breakability.

Like silicone bongs, metal is being used more and more to make bongs than ever. Sadly, like silicone, metal bongs will alter the flavour of cannabis. And the last thing you want to do is hit your teeth on a metal pipe.

While the first generations of bongs, or baungs, may have been bamboo, they are far from common. Unfortunately so, as the flavour of bamboo and cannabis is quite lovely. Bamboo is also very durable, a nice medium for show and practicality.

Last but not least, ceramic bongs are a good option for anyone. It has little to no flavour retention. And while it can break, it doesn’t smash into tiny little pieces like glass, making it much easier to clean up in case of an accident. Knock on wood that this never happens!

Shapes and Styles of Bongs

The shapes and styles of bongs have evolved immensely from the original bamboo baung. It may feel a little daunting selecting one for yourself. But have no worries, as we’re going to break it down for you.

Straight tube bongs are just that, straight tubes with a flat bottom. This option is quite common and can be found at any bong shop. They almost always include a simple downstem and bowl. The issue is that taller straight tubes bongs are prone to falling. Their center of gravity is far too high for the flat bottom. If you do plan on purchasing a simple bong, we suggest the next variation.

A safer option in terms of durability and stability is a beaker bong. It’s essentially the same as a straight tube bong, but with a rounded bottom. This makes it much harder to tip over and break. If you’re going to be spending good money on a piece then it surviving long sessions is important. 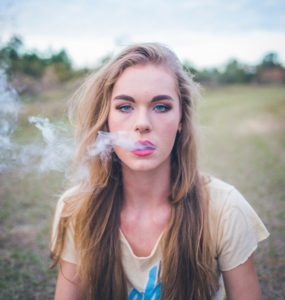 No, this bong isn’t an accessory to wear around your neck or sexual. A choker bong is simply a type of bong that does not have a removable downstem and bowl. Instead, a little hole is placed on the side. To use this bong you must first cover the choke. Proceed to light the bowl and once you are done to take the “bong chop” remove your finger. This then allows air to force the smoke into your lungs.  It’s the same as you would with most handheld pipes.

Ice bongs are either beaker, round or straight tube bongs with an ice catcher built-in. This ice catcher allows you to drop a few ice cubes into the bong to cool the smoke. We don’t suggest using these as the cold smoke may be harmful to your lungs.

Multi-Chamber bongs are also variations of the straight tube bong. It has multiple stems and chambers that also fill up with water. The extra water in these sections produces a much smoother and cooler hit. These types of bongs tend to be more expensive and can seriously break the bank. As well they are quite hard to clean and can drive you nuts doing so.

Percolators are similar to multi-chamber bongs, they function to cool the smoke. Percolators come in various styles and shapes. Such as Honeycomb Percolators, Tree Percolators, and Matrix Percolators. They all function relatively similar, to create a smoother smoking experience.

Ah, gravity bongs, the most DIY of the bong family. Gravity bongs are purely novelty, mostly used at parties for fun. To use a gravity bong, a large bucket of water, water bottle and bowl is required. The gravity bong uses the water to push the smoke up through the water bottle forcefully into your lungs. This method is mostly novelty and not regarded as the best method of consumption.

The Family Tree Will Continue to Grow

While we have covered a large number of bong materials, styles and shapes there’s no doubt more are to come. The types of bongs available will change as laws and availability of cannabis increases. This doesn’t mean the previously mentioned aren’t good. In fact, they’re great. And just because a newer bong is released, it doesn’t make it better. With that being said, there’s already plenty for you to choose from, as are there plenty of concentrates to consider for your bong. Whether starting off or increasing your collection, there’s a bong for you.